The Search For A Trailer


Now that I knew where my boat was, it was time to work out how to get her back here.

Chip had given me some detailed instructions on what equipment I would need, and the procedure for getting it loaded. It weighs in at just over 3000 lbs., so it wouldn't be an easy task.

So, not having much money to spend, I jumped on Craigslist to look for trailers. Now, if you have never looked for a 16'+ dual axle, flatbed trailer, let me tell you, they're expensive! I could get a used car for the price of a trailer!

Everything I saw was out of my price range of $500. The boat trailers were cheaper, but they were all for smaller, lighter boats. I needed something that would support a car or truck, not a little fishing boat, or rowboat.

I finally came across one on CL that was about 75 miles away, in the town of Cedar Creek Lake, for $600. A little high, but worth a look.

This one was home made from a travel trailer, so it had a strong frame. The guy had used it for several trips hauling cars and pickup trucks from Arkansas, so I knew it would hold the weight of the boat. 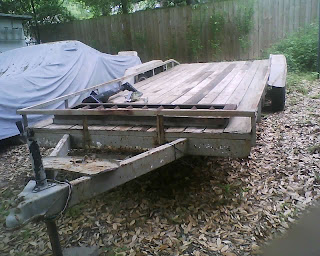 It was in rough shape, but that didn't bother me. I needed a trailer, and had already decided to buy it. Since the spare was damaged, he offered to sell it for $550. I asked him if he'd do $500, and he said sure! 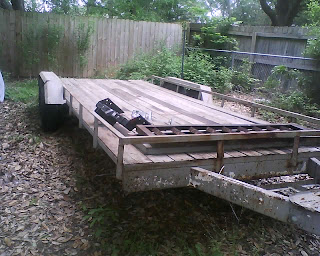 Woo-hoo! Right in my budget!

So he gave me one! No extra cost!

Well, I was going to just buy a receiver hitch for the truck, and come back another day. He said that he would call his son, and have him drill the hole larger. Don't you love it when someone volunteers you for something like that? I thought his son would refuse, but he was a nice guy and said he'd do it (free!).

Off we went to the next town over, where his son lived. His son thought he had a 1" drill bit for the job. Nope.
He suggested we look at Lowe's down the street. They only had one for $35.

I figured it was worth it, and was going to buy it, and the guy selling the trailer wouldn't let me. He paid for it!

So, back to his son's house and got the bumper drilled. Back in business!

We went back to the trailer, and I got it hooked up. Piece of cake!

Then Ron, the seller of the trailer, asked me of I was serious about buying a receiver hitch. I said that I was, and he said he'd sell me a brand new one that he had for $25. I couldn't pass that up, and when he was looking for it, he found a passenger side mirror that would replace the broken one on my wife's truck.

He just threw it in with everything else! More freebies!

Ron was a big help, and a great guy! He really helped make this all possible. Thanks Ron!