I had been searching for her since 2007. I had been told by a friend that all the boats were gone from the Marina (Lake Palestine, Texas). I tried to call someone to find out about it, but I couldn't reach anyone.

They had all three of my phone numbers, and never bothered to call and let me know. I even went out there in person several times, but no one knew anything about it.

I had been hoping that they moved them to another location for safekeeping. I was willing to pay storage fees if necessary. I just wanted her back!

I asked around, posted Craigslist ads, offered rewards...nothing! This went on for years with no results. 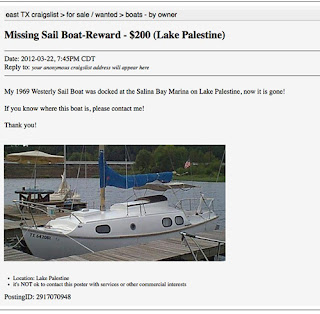 Finally, I was able to get the manager on the phone. He denied that they ever even had a marina there! He sounded very nervous about it all, and said that he would ask the owner about it, and get back to me. Nothing.


It was the only one left at the dock, in exactly the same slip that I had it! I even had other pictures of it there from years before, proving that it was there at one time. I had them dead to rights on it, so I called them again the next day.

The manager, tried to deny it again. He said, "Look, I told you, I've been here since 1999, and we never had any marina, or any boats here!"


I told him that I found the aerial view on Google Maps, and it showed my boat at the slip. Dead silence. Busted.

Then I told him that I had other pictures of the boat at the dock, in the same slip. All of a sudden, he remembered that they used to have a little marina with a few boats, but they were all gone now. Duh! I know that! I just want to know where mine went.

So, he asked me who I bought it from again, and I told him it was Chad. The guy was a friend of the marina owner, so he told me to call Chad about it, and gave me the number.

He was scared since I had proof now, and I think he was in a big hurry to just get rid of me! Or maybe to change his pants!

(From what I heard, they "confiscated" several boats when they closed down. I'm not sure how many they sold as "abandoned" boats, but I kept my registration up in case someone tried to get a bonded title for her.)

I called Chad's number, and left a message. Chad's brother Chip was the one that originally restored the boat, and then traded it for another boat that Chad owned. I bought the boat from Chad in 2003.

I finally felt like I was getting somewhere on this quest. Later that weekend, I went online and did some searching for Westerly Nomads, just for fun since I had a feeling that I was getting mine back soon.

While I was searching, I found a link to a Facebook page that had a Westerly Nomad for sale. I went to the site just for kicks....IT WAS MY BOAT! It was even the same picture I used in my Craigslist ad! 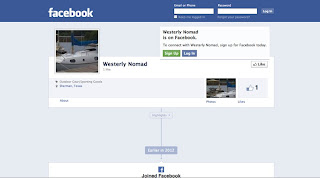 I spent a few hours that night trying to find some contact information. It wasn't on the FB page. Strange, how can you expect to sell anything if you don't have contact info.

Anyway, I was able to find an email address for Chip, and I sent him an email about it. he replied the next morning:

Yes I have the Nomad. It was brought back to me because I once did a complete restoration on it and when it was brought to me, it was considered abandoned. I paid no money for it. It is kind of funny that you ask about it, I have been trying to get it out of my yard for a few years now, and this last week, 4 people (including you) have asked about it. I told 1 guy, just come and get it, he is supposed to get it this weekend, so you emailed me just in time. I will put him on hold and you can come get it if you want. It is not going to be an easy task, it is not on a trailer and I live in Sherman, TX.

If you have never moved a boat of this size and type, then this will be a major task. If you are serious, please contact me at xxx-xxx-xxxx, if I don't answer, leave a message and I will call you back.

I called him as soon as I got the email. I was excited! We talked for quite a while, and he was glad to know that it would be going to someone that appreciated her. I told him that I had the title, and even kept all the registration current, even though I didn't know where the boat was. He never even knew it had a title and registration. He thought it was abandoned.

He agreed to hold her for me.

I finally found her again!