I guess you could say it was love at first sight.

She was beautiful, and I was smitten with her loveliness, her curves, her grace.

OK, most people wouldn't have seen her hidden beauty, but she was the most fascinating thing I had ever seen.

It was in 1999, or 2000 I believe, and I was working as a video producer. I was going out of town for a location shoot when I saw her sitting in front of the boat repair shop.

I hit the brakes and backed up for another look. I had never seen anything like her before! She exuded a style and gracefulness that captivated me.

I had discovered a Westerly Nomad, even though I didn't know what it was at the time. 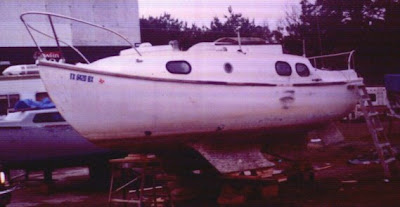 (She was being rebuilt when I first saw her. You may not see her beauty, but I did!)

Even in her condition I wished I could own her, but at the time, there was no way. We lived in an apartment, and I wasn't making enough to support a boat and a family, but the desire was there.

Actually, I had the desire since I was in my mid teens. The first time I saw Jaws, I wanted to live on a boat. Most people were scared by it, but I saw Quint's boat, with a living area in it, and thought it was the coolest thing!

From that time on, I was hooked on the idea of living on a boat. I realized that a powerboat would be expensive to maintain and operate, and that a sailboat would be the perfect escape vehicle! World travel was possible.

I had a plan...well, not really, just a dream. A dream that would haunt me for years, surfacing occasionally to torment me, and then be squashed by reality.

So, for years I devoured boat plans and designs. I bought plans from Glen-L Marine and others, and several times I started building a boat, only to have to give it up for lack of finances.

I had even tried to start a boat building business, but in the mountains of Arizona, it was a bad idea. I still don't know why I never seriously looked into a used boat. I looked at a few that were big enough for ocean voyages, but they were so far out of my minimum wage price range, that I just gave up.

Fast forward a decade or more...

After living here in Texas for a while, we were finally able to buy a house. My own property meant that I had somewhere that I could put a boat and work on it!

I don't care about yard work, landscaping, or anything like that I helped my mom with enough of that to last me a lifetime! Yeah, I still have to do it whether I like it or not, and developed a double hernia from it. That sucks!

Back to the fun stuff...boats!

Shortly after we moved in, I knew it was time to finally get a boat....Somehow! I was making more money, everything was covered, and I even had some extra spending cash.
I got an impression that I needed to head down 155 South toward the lake area, and look for boats for sale, so I took a drive one day at lunch.

There, sitting outside a boat repair shop was a sailboat on a trailer with a for sale sign!

(If you look closely at the picture above, you can see the San Juan just behind the Westerly!)

I paid him for it, borrowed a truck, and took it home! I finally had a sailboat! A dream come true! At least for a week or two. Then things changed.

He didn't have the title for it when I bought it, but it was at his house, and he said he'd call me when he found it. No problem.

He called me less than two weeks later, and I went out to his shop to get the title. We talked about boats a little more, and I told him about my dream. He told me that the San Juan 21 was too small for open water voyaging.

Then he told me about a couple of other boats that he had, one was a Catalina 27, the other was a 22' Westerly. Obviously, I was interested in the Catalina 27. It was a big boat (to me), and I thought it would be perfect.

I went and looked at both of them, and the Catalina looked to be perfect to me, but the other smaller boat was in better condition. Plus, the Catalina 27 was only $2500, and the Westerly was $4500.

I decided to trade the San Juan back as a down payment on the Catalina 27, purely based on price. I figured that I could fix it up and make an ocean crosser out of it. Then, I spent some time on it at the marina on the weekends, and felt the hull 'oil-canning' just from the sheltered water of the lake. Plus, I did some research, and saw that it would cost a lot to make it ocean worthy.

I talked to Chad, the shop owner, again, and asked him if I could get the Westerly instead. He said it was a better choice, and came down $500 on it.

The whole time, I never realized that it was the boat I had been so intrigued by just a few years earlier! I didn't put it together until a couple years later when I saw some pictures of it that were taken when his brother was working on it. 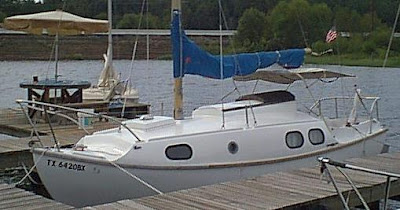 I finally had it! That beauty that I saw in her was unrecognizable after she was all dressed up, but it was still there.


Maybe if I saw her out of the water, I would have recognized her keels, but in the water she looked different.

But now, I finally had a boat that could handle the ocean! My dream! All mine! (Well, OK, after a year or so of hassle getting a bonded title anyway.)

I spent a lot of time with her, even though I never sailed her. Did I mention, I didn't know how to sail? I didn't think so! Does that make the dream crazier?

And that leads to the next part of the story, when tragedy strikes!